Apple watch pre-orders have now been active over a week and are reporting some very high numbers.
With the number of Apple watches pre-ordered currently standing at over 2.5million units! – In just 7 days!

That’s a lot of people committing a fair whack of money. In case it hasn’t clicked yet, that’s at very least $1,000,000,000 ($1b), but we’ll assume most people have gone for the mid-range watch, and not the cheapest, and take a stab at the dark that the Apple watch has already generated a turnover of about $1.5bn! – In one week.

I personally had an in-store demo of the Apple Watch and the demo is basically a staged step-by-step video, you cannot link your phone or really do anything to test it out, basically watching a slideshow of features on the screen.

So, is the Apple Watch really worth it?

I’m going to make a bold statement to save you some time: Yes (But… only right this second. It’s like me saying this bag of fruit is a bargain price, but if you don’t plan on eating it until next year hyou may think a little differently.. – and that’s only if you’re even interested in a bag of fruit.)

The Apple watch will quickly be replaced by the 2nd generation. Currently I’d say the Apple Watch is just about worth the extra price tag above the other smart watches in the market, especially if you’re an Apple/iPhone owner. Of course if you’re not super techy or not even sure if you want an Apple Watch, then it’s absolutely not worth spending $400+ on something that is basically a secondary screen for your iPhone.

My first impressions of the Apple Watch:

I think this Apple Watch will oddly break the habit of tech ruling our lives and wasting our.. time. With such a limited and concentrated screen real estate and usage ratio, we’re forced to read the notification, reply quickly and get on with our day. Where as on an iPhone you may have an email, and also happen to notice your 3 Facebook notifications (none of which you really give a shit about), 2 reminders to feed your e-pets in that game you forgot about and 2 retweets from some random bots, all of which waste your time and you’re not happy until you’ve ridded your screen of those pesky red notification numbers.

Screen quality was an absolute wow, I did not expect it to be that sharp or bright. Superbly crisp. 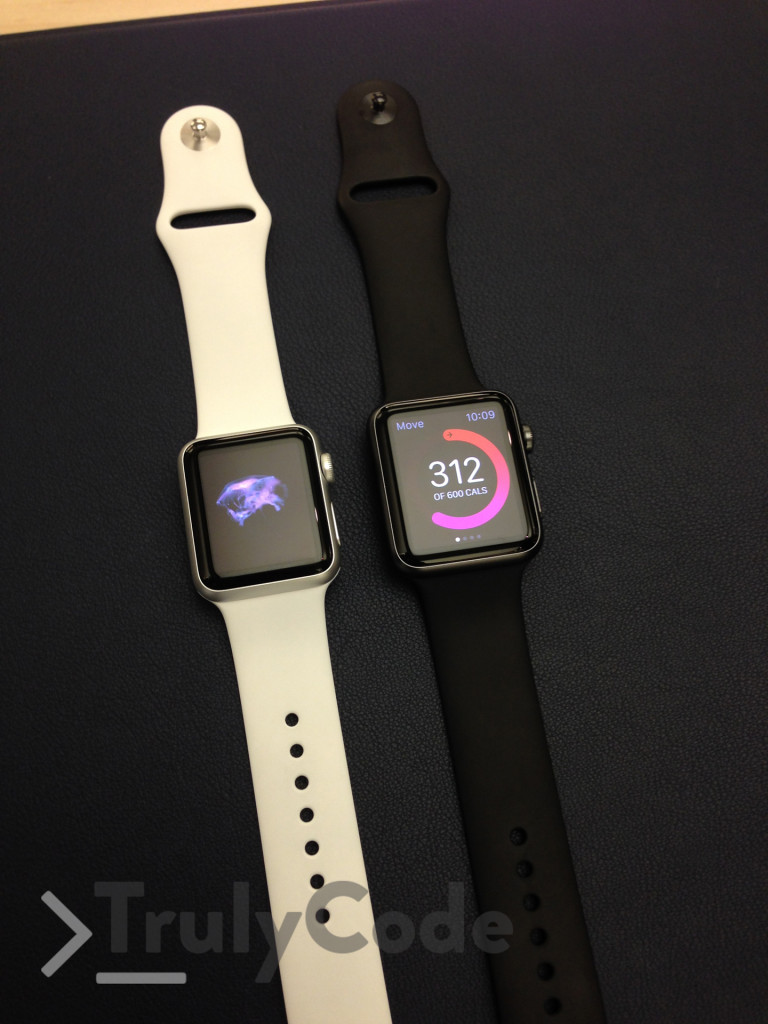 Size was an interesting one, when I first saw them side by side I felt the small one looked tiny. After trying them both on though I could not tell a difference. The Apple advisor suggested that the smaller face was actually the first Apple designed, and then scaled everything else up for the larger edition, and that there is still an odd stigmatism that the small watch is made for ladies.
The actual height of the watch shocked me, I was expecting a much thinner face, it’s about the same thickness as any standard rotary gentleman’s watch (1cm high), though thanks to the beveled edge, it does appear a little thinner than it is. I do have no doubt that by the next generation it’ll be down to 0.8cm thickness though.

Features
Like people in the past would describe the iPad as “just a big iPhone”, the Apple watch is “just a small iPhone”, the hardware is there, the way in which we use it will dictate the future of the software, for the moment it really is just a small iPhone on your wrist with some cool added bonuses. (Heart rate monitor, tactic feedback, health and Apple Pay).
Again, all I really was shown was the basics, so I can’t really list the top Apple Watch Features.
The watch cannot really do anything much more than your iPhone can do. But as someone who has a 2×21″ iMac setup, also with a 29″ screen, iPads, iPhones and more tech than you can shake a stick at, sometimes it’s just never enough! 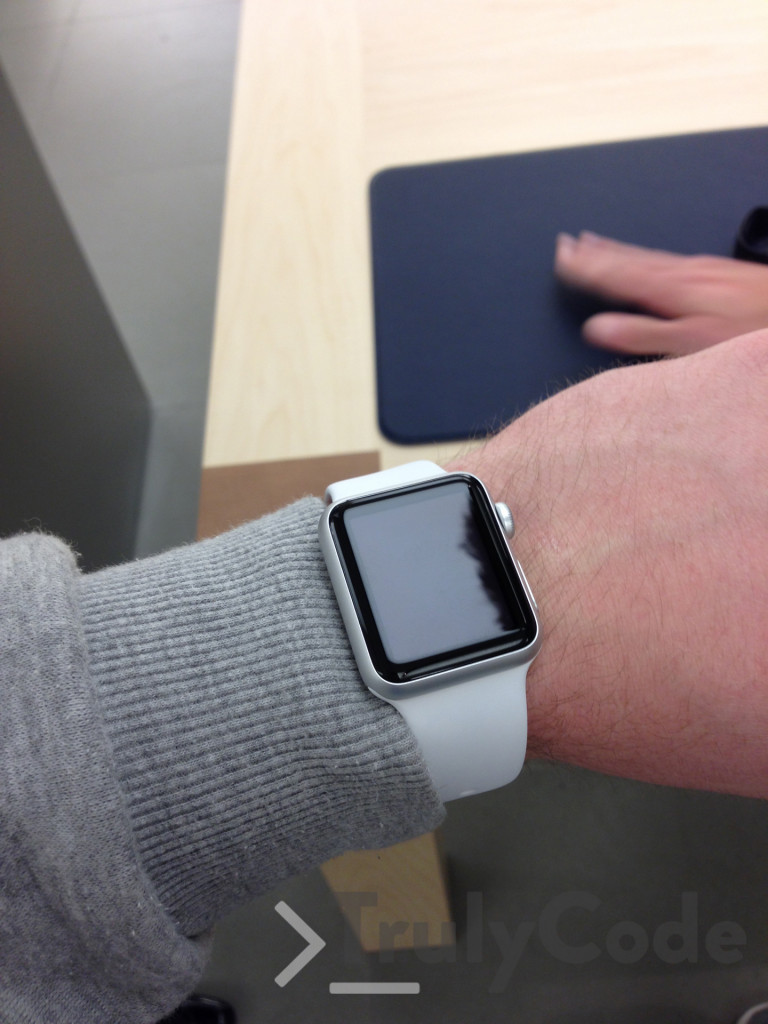 My main interest will be in the kind of trade-ins or upgrade offers Apple will give for the 2nd generation, even with phones, long before they really became “smart”, we were used to upgrading them every 2 years or so, with watches, we’re more inclined to an upgrade cycle of 10 years+ currently.

There’s clearly some very alarming issues with the Apple watch, however I don’t think it deserves quite the negative criticism it has received in many regards.
Firstly, battery life, 1 day battery life is clearly a very odd predicament to suddenly have for a watch, where you’re used to never even considering that your watch may not work anymore. The in store Apple colleague described this to me quite elegantly however, our phone batteries did used to last weeks, they now last 1 day too. It’s just a changing world, and even though it’s still called a watch we need to accept it’s a lot more than that. Just like our phones are called such, however most of us use the phone feature less than 5% of our total “phone” usage.

My main interest will be in the kind of trade-ins or upgrade offers Apple will give for the 2nd generation, even with phones, long before they really became “smart”, we were used to upgrading them every 2 years or so, with watches, we’re more inclined to an upgrade cycle of 10 years+ currently. Whether that means money off trade-ins, hardware upgrades for only certain parts of the watch or the worst case scenario, just sell it on eBay? That’ll be an interesting press conference release by Apple.